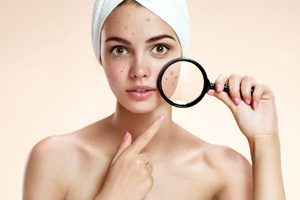 Acne is the term for the blocked pores (blackheads and whiteheads), pimples, and deeper lumps (cysts or nodules) that can appear typically on the face, neck, chest, back, shoulders and upper arms. Seventeen million Americans currently have acne, making it the most common skin disease in the country. While it affects mostly teenagers, and almost all teenagers have some form of acne, adults of any age can have it. Acne is not life-threatening, but it can cause physical disfigurement (scarring) and emotional distress.

Sebaceous glands are attached to hair follicles in the skin on the face, neck, back, and chest. They produce an oily substance called sebum, which normally reaches the skin surface through the opening of the follicle (pore). When follicles become plugged, sebum cannot reach the surface of the skin. This blocked sebum promotes the growth of bacteria (Propionibacterium acnes, or P. acnes) beneath the skin, which in turn produce chemicals and enzymes that attract white blood cells, causing inflammation. Eventually, the follicle wall breaks down and the sebum, skin cells and bacteria erupt to form lesions or pimples. These are the visible effects of acne.

Rosacea is a chronic skin disease that causes redness and swelling on the face. The scalp, neck, ears, chest, back and/or eyes may also be affected. Symptoms range from red pimples, lines, and visible blood vessels to dry or burning skin and a tendency to flush easily. Many people find that the emotional effects of rosacea – such as low self-confidence and avoidance of social situations – are more difficult to handle than the physical ones. Although it can affect anyone, rosacea typically appears in light-skinned, light-haired adults aged 30-50. It is not yet known what causes rosacea and the disease is not curable, although it can be treated with topical and oral medications, laser therapy or laser surgery.

What Our Clients Say

“Premier Dermatology has a elegant and professional atmosphere that will cater to whatever your needs are. There are a wide range of treatments and services to choose from. With a friendly staff that will fit you in with the best of the best. I highly recommend Premier!”

“When it comes to Premier Dermatology everything about their services are top notch! As soon as you walk through there door you are surrounded by friendly and professional staff. This place is amazing and I always highly recommend them!”

“I had the best experience at premier spa. The front desk staff were very kind and professional. I can’t wait for my next appointment! I highly recommend this place.”

“Had such an amazing experience from start to finish. Office personnel and assistance were very friendly and pleasant. I would without a doubt recommend this practice to anyone. Can't wait for my next session.”

“Very friendly staff and always professional. Comfortable atmosphere and all around great place. I always recommend Premier Dermatology to all my friends and family.”

“I was very pleased with Premier. Their level of care, professionalism, and courtesy the staff and doctors have at Premier is unmatched.”

“I was having some skin issues a little bit before my wedding and came to Premier Dermatology and they really helped me clear up my skin! All of the girls were very friendly too! Thank you!!”

“Excellent staff and impeccable service. The facility was beautiful they answered all my questions and put me at ease. Highly recommended!”

“Premier Dermatology was so great - they removed skin cancer and did a wonderful job with explaining the process and accelerating the healing. I recommend them. They made me feel very comfortable.”

“Premier was a fantastic experience. They took care of me quickly and were very friendly and personable.”

“I have had great experiences here. The staff has been excellent . And they have been very Professional . I tell everyone that needs anything done to go to Premier!”